March 1, 2021 "Our early spring market is in full swing carrying on from a fast start in January," said Victoria Real Estate Board President David Langlois.  "Our market remains one with tightly constrained inventory and high demand. The good news is that we have seen some stabilization in listings and condo pricing between January and February, but we continue to see huge pressure on single family homes – new listings are snapped up as soon as they are listed. As a result, the pressure on single family homes continues to ramp up. There is significant competition for desirable homes – and in our marketplace most homes are desirable – and people competing for properties pushes prices up." 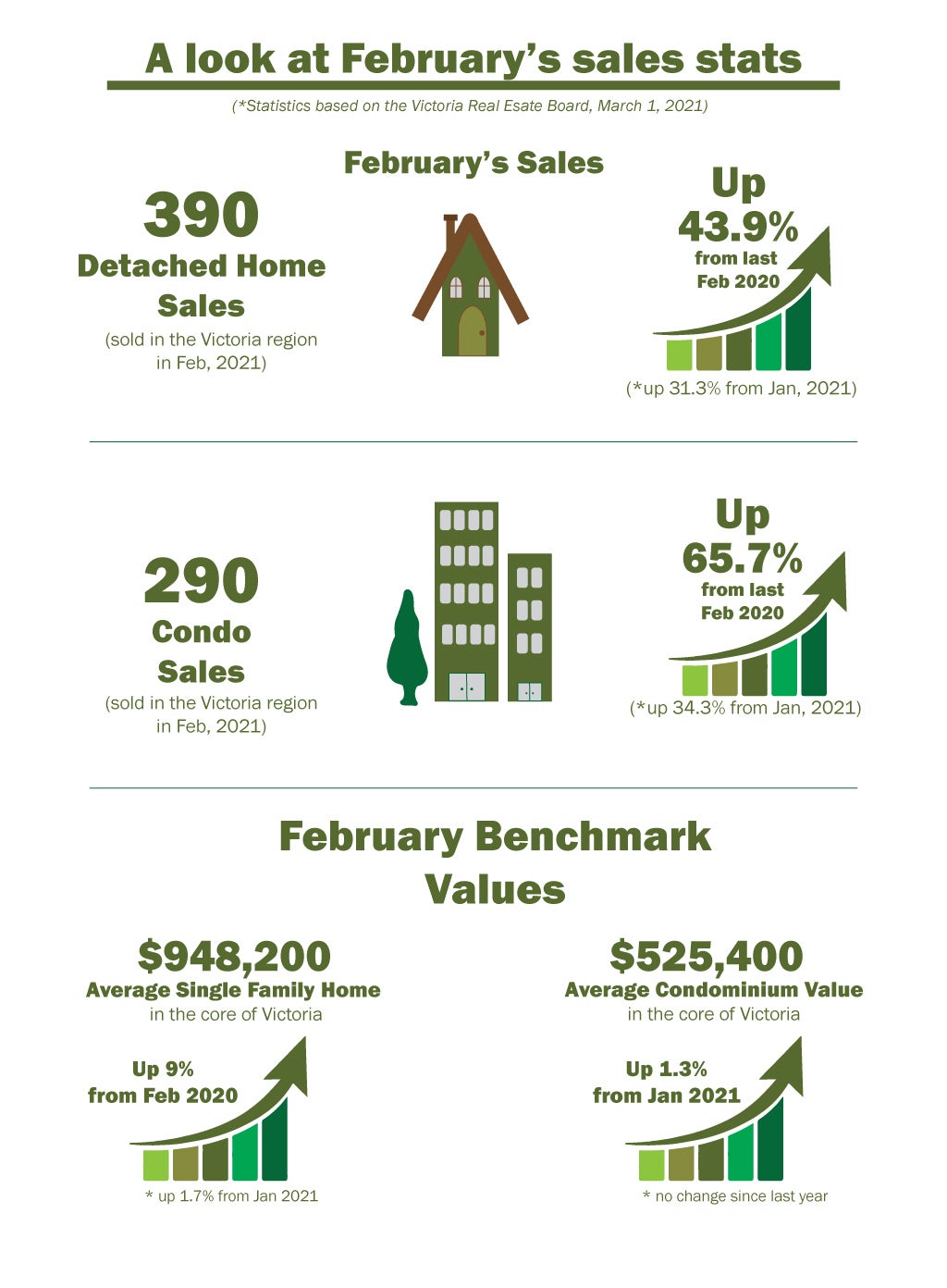 Homebuyers in the Capital Region opened up their wallets to scrimmage over record-low inventory as a winter buying frenzy brought record-high sales and prices.

863 properties sold throughout the Capital Region in February, according to figures released by the Greater Victoria Real-Estate Board, firmly setting a new sales record for the month and landing the second-highest average single-family-home prices despite several days of snow and chilly temperatures. To put the pace of sales in perspective, last February saw 563 property sales, while the former record was set 29-years-ago in 1992 with 780 sales (nearly surpassed in 2016 when 772 transactions were recorded).

The month’s purchases of single-family-homes yielded an average price of $1.16 million among 390 transactions, falling from January’s all-time high of $1.2 million over 290 sales. February’s median settled at $955,000.

Townhomes also drew record-setting prices and buyer demand, yielding 102 purchases (the most, ever) with a record-high average price of $682,071 and a record-high median of $630,000.

“Seeing the average price for single-family-homes slide, while condos and townhomes set new price records, gives support to the theory that we may have reached a pricing plateau for houses,” says Victoria REALTOR, Marko Juras. “However, we are just on the cusp of the busiest buying and selling period of the year, and how that impacts the market remains to be seen.”

Traditionally the months of March, April, May and June see the strongest demand pressures from purchasers, but this year they’re coinciding with historically low inventory levels. And the outcome could land homebuyers and sellers in new territory, Juras says.

“1,318 listings are the lowest we’ve seen in this market since record-keeping began in 1996, and to put things in perspective, the listings we should be seeing in a market the size of Victoria’s is multiple times where we’re at today. How this shapes up this spring is anybody’s guess, but the lack of inventory on the re-sale market is a concern when demand is as strong as it has been since the late spring of 2020.”

With sky-high single-family-dwelling valuations from Sooke to Sidney, purchasers priced out of that segment of the market are turning to townhomes, and due to their rarity throughout the region, the next options suitable for families are larger condominiums, and that has lead to a run on offerings on the West Shore tethered to social changes brought on by COVID-19 that for many workers have minimized the need to be situated close to employment.

“We’re starting to see more demand for larger condominiums as purchasing demand cascades from a house, to a townhome, and eventually to bigger condos. And the West Shore tends to have larger units at price points far more competitive than they are in downtown Victoria or within the urban core,” Juras says. “What is in strong demand are homes in the 1,000 square foot range and larger, which can be several hundred thousand dollars more expensive in Victoria compared to Langford, Colwood or Sooke, and buyers have found themselves in bidding wars for those larger units as they shift away from a focus on proximity to work.”

Continue to full article on Citified...