The fast pace of Victoria real estate market surges on 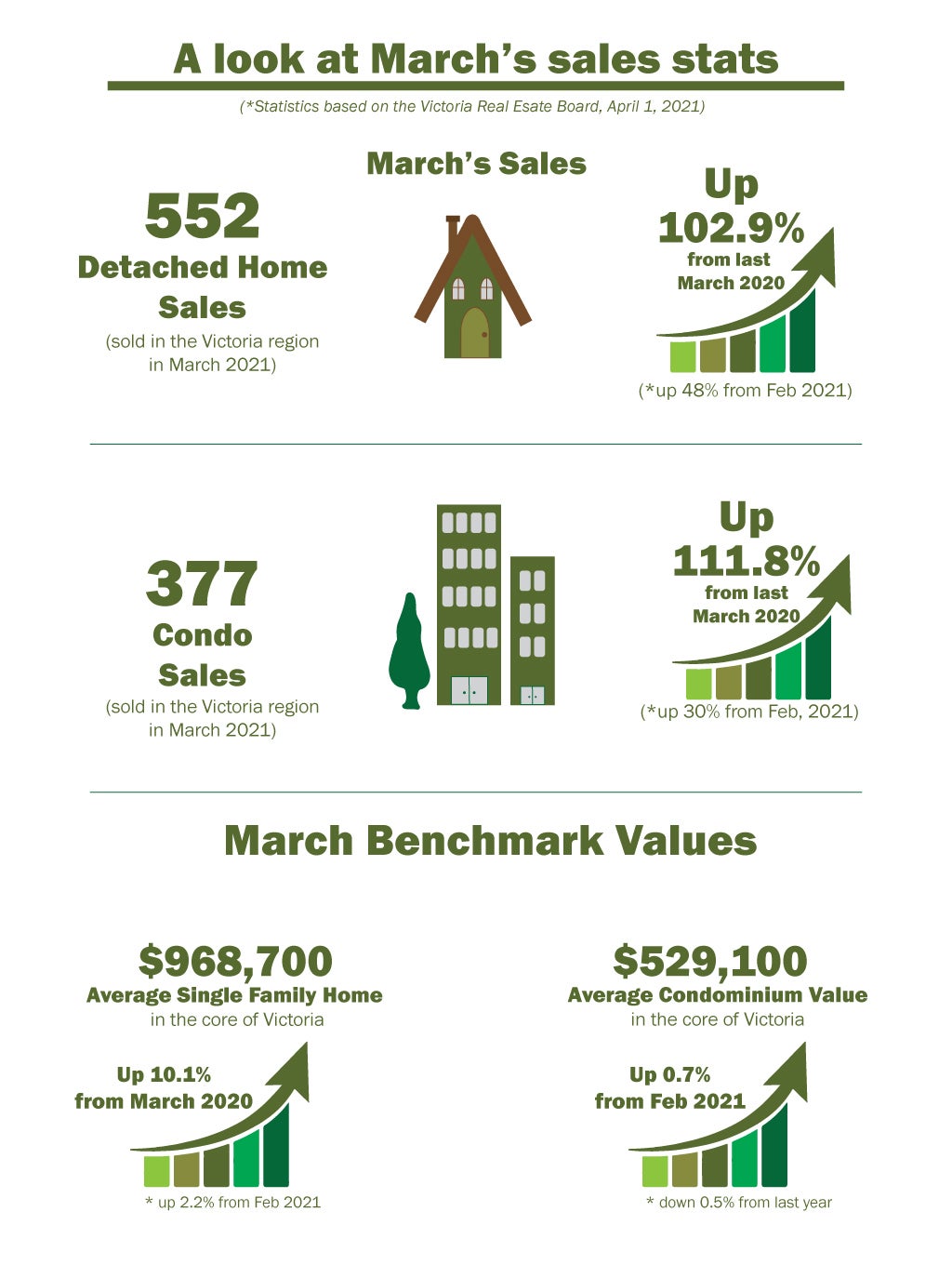 Every housing category in Greater Victoria set new pricing records in March as COVID-19’s impact on the local real-estate market hit a one year milestone.

In the span of 12 months, home sales rose from a sudden drop at the start of the pandemic to an all-out frenzy impacting every housing category amid ultra-low active listings, according to statistics released by the Victoria Real-Estate Board.

Single-family-dwellings, townhomes and condominiums surged in value in the third month of 2021 to set new median price records along with record averages for townhomes and condominiums among 1,091 Multiple Listings Service (MLS) transactions, not including commercial investments and mobile home sales which brought the monthly total to 1,173 purchases (itself a record for the month of March).

Single-family-homes were elevated to a record-breaking median of $1,022,000, meaning more than half of the 574 houses sold from Sooke to Sidney breached the million dollar mark. The average landed at $1,176,691, itself just shy of January’s record-setting $1.2 million average.

Condominiums saw 377 transactions via MLS, the highest-ever for March, with record-breaking median and average valuations of $486,691 and $554,137, respectively.

Coupled with what can arguably be described as intense demand was a historic low volume of available inventory, sitting at just 1,310 listings which represents a near 1:1 ratio of availability and absorption.

“The market has to slow down at some point, but I don’t think that’s going to happen in the immediate future,” says Victoria REALTOR Marko Juras, adding that “strong demand pressure for housing on the south Island has come up against a dearth of available listings.”

As to the factors at-play in the market, Juras says it’s much the same pairing of ingredients that have driven the market since last spring.

“With interest rates remaining as low as they are for as long as they’ve been so low, and despite small increases over the past month or two, we can anticipate demand to continue to remain at record levels and prices to remain elevated purely as a result of competition from thousands of purchasers pursuing record-low volumes of homes, with a significant number being first-time buyers or new entrants to the south Island market without their own re-sale inventory to add into the mix.”

With single-family-dwellings once again landing well above the million dollar mark after surpassing seven digits for the first time in 2020, townhomes and condominiums have become hot commodities as buyers settle for alternatives to detached homes.

“The level of competition for condominiums is the highest I have ever seen,” Juras says. “It is not uncommon for larger condos, especially on the West Shore, to field multiple offers and bidding wars. This has been a trend since early 2021, and now we’re seeing similar competition for 1990s-era inventory in Victoria’s urban core, which tends to be larger, and at price points that more buyers will find attainable.”