"The real estate story right now continues to be inventory," said Victoria Real Estate Board President David Langlois. "The market is driven by inventory; and fewer home listings lead to fewer home sales. In that context, these numbers do not reflect a downturn in our market but reveal sales falling due to this continued trend of low inventory." 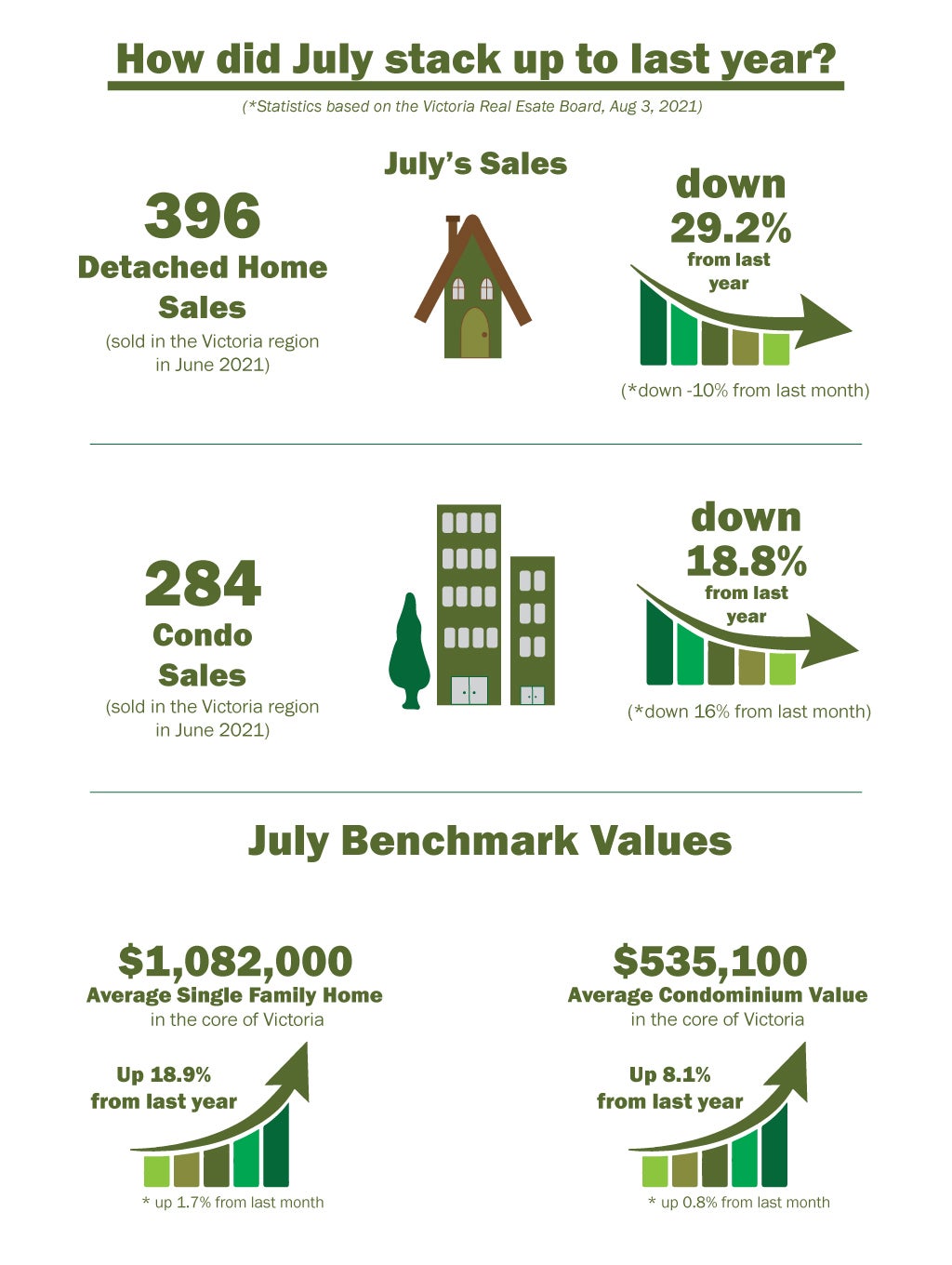 From the Times Colonist, Aug 3, 2021A shrinking number of properties for sale in Greater Victoria is translating into fewer sales, despite strong demand.“The real estate story right now continues to be inventory,” David Langlois, president of the Victoria Real Estate Board, said Tuesday as July sales statistics were released.At the end of July, there were just 1,270 listings — down by 52.1 per cent from the 2,653 properties on the market at the same time a year ago.Inventory dropped by 7.6 per cent, or 1,375 listings, last month from the previous month.“The market is driven by inventory and fewer home listings lead to fewer home sales,” Langlois said. “In that context, these numbers do not reflect a downturn in our market but reveal sales falling due to this continued trend of low inventory.”A total of 835 properties sold last month, down by 14.7 per cent from the 979 sales in July 2020, the board’s report said.Elton Ash, regional executive vice-president for RE/MAX western Canada, said the real estate market is returning to normal patterns, as sale are typically lower in July and August after a stronger spring.He predicts inventories will rise in the capital region because that’s what happening in major markets across the country. “We are seeing inventory levels starting to increase. I’m confident we will see it higher in Victoria as well.”Prices in the capital region have remained strong so far this year.The benchmark price for a single-family home in the core was $1.082 million in July, up by 1.7 per cent from June.A year ago, that benchmark was at $909,900.Benchmark refers to the value of a home in a particular area over time, a method the real estate industry says more accurately reflects the market than average prices.In May, the benchmark price for a single-family house in the core topped $1 million for the first time, although the average price had surpassed $1 million previously. The core consists of Victoria, Esquimalt, Oak Bay, Saanich and View Royal.For many people, a single-family house in the core area is financially out of reach, a factor driving condominium construction and sales. Condos are typically less costly than a single-family house.The benchmark value for a condominium in the core in July was $535,100, an 8.1 per cent increase from $494,900 in July 2020, the board said.Langlois said it’s important for the long-term health of the housing market that the region maintains a “strong focus” on developing new homes to meet growing demand.For the Vancouver Island Real Estate Board, north of the Malahat, where inventory is also tight, 450 single-family homes were sold, down 15 per cent from 531 in June. In the condo apartment category, sales dropped by seven per cent from June. However, row/townhouse sales rose by 29 per cent from the previous month.
Join our mailing list and receive a monthly real estate update right to your inbox!